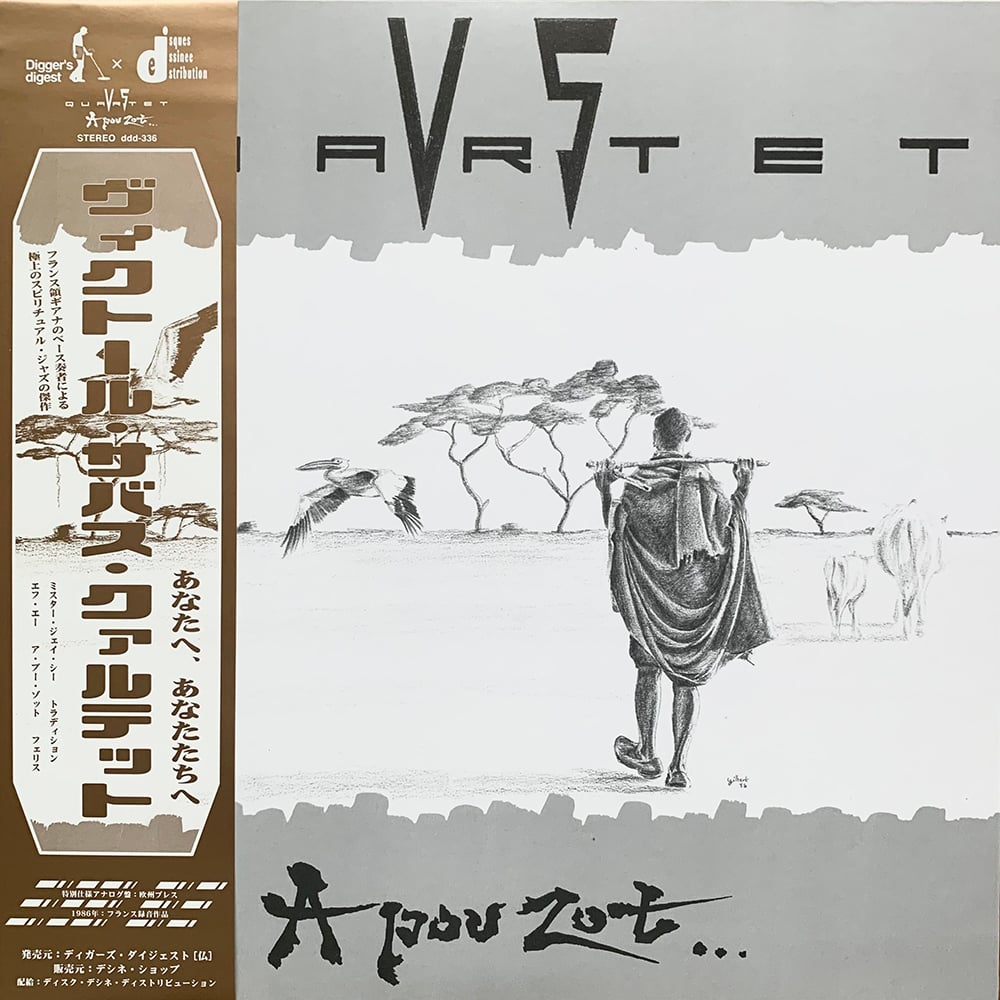 Our Victor Sabas A Pou Zot repress was mastered and distributed in Japan by our friend Masao from Production Dessinée. We thought it was relevant to produced an real OBI stripe ! We just received a few copies only available through our site.

It was in Paris, back in 1975, that Victor Sabas, a young bassist from Guyana, crossed paths with other Afro-Caribbean musicians.
He socialized and rehearsed with the cream of the crop of contemporary jazz musicians, from Richard Raux to Georges-Edouard Nouel, including Sylvain Marc, Mino and Patrick Cinelu, bassist Michel Alibo, Dominique Gaumont, Jean-Claude Montredon and Ramadolf- to name but a few.

In April 1986, after four years spent performing live and perfecting their music, the Victor Sabas Quartet recorded their first album “A Pou Zot…” (For You Others… in Creole). Lack of funds meant they had to record the takes straight to stereo, without the option of re-recording. What transpired from this session was that despite their youth, the musicians had flow, synergy and well-honed sound: the five tracks were recorded in a mere 6 hours!

Like the Afro American musicians from the early 1960s Free movement, the band rejected the “Jazz” label for fear of being trapped in a musical universe clearly too codified for their creativity.

"Mr JC", the first track on the album, paradoxically confirms that jazz (John Coltrane’s and that of his contemporaries) remains a major source of inspiration for the VS Quartet, who richly reinterpret its canon through the prism of their own musical heritage - from Guyana to Brazil, via Martinique and Guadeloupe. This harmonious fusion between Afro-Brazilian percussions - the drums tinged with gwo ka biguine rhythms and the Latin jazz intonations of Mario Canonge - is clearly on display with "Tradition", the second track, reaffirming the band's commitment to their roots’ music.

During the recording session, Allen Hoist, an American musician based in France, backed the quartet on the alto sax and the flute. The contribution of this (still to this day) underestimated prodigy is essential to the album. Product of the "Great Black Music" tradition, this multi-instrumentalist, singer and arranger, even composed "FA", a piece where Creole influences are blatant, almost flirting with the sound of New Orleans, but in a minimalistic yet technicolored way.

The eponymous "A Pou Zot ..." reveals all the richness and talent of this young quartet, all at once precise and incisive, gentle and passionate. Each soloist brings his own unique vision to the table: Allen Hoist's aerial solos on the flute verge on perfection; Victor Sabas' bass, the only electric instrument on the album, underscores the entire opus with a powerful groove; Mario Canonge highlights his talent early on, with this piece between modal jazz, spiritual and Caribbean jazz.

To wrap it up, the Brazilian Dosty Dos Santos replaces Canonge on the piano and gives us "Féliz", a ballad which paves the way for Hoist to carry the theme, as much of a virtuoso on the alto sax as he is on the flute; and with a sound close to that of Art Blakey, Serge Marne once again provides his impeccable rhythm.

"Throughout this album, I wanted to take a family photo, a sincere snapshot of the music we liked to play", said Victor Sabas, "but I didn't want to be labeled a jazz musician. "

Ironically, 35 years after its release, it is jazz collectors who love “A Pou Zot…”, an entirely self-produced deep jazz album which deserves its status of “holy grail”.
Free from the conventions of classical jazz yet full of Afro-Caribbean and Brazilian influences, this first timeless VS Quartet album bridges the gap between these two universes, whose boundaries have always been porous, thereby ensuring its status as a fad-resistant piece.